I’ve always hated self-help books you find at B&amp;N or the library on how to set up your own home network. In short, they always would assume that you had high-speed internet coming into your house and that you could create a standard configuration. However, up until about 30 minutes ago, we were using dialup for our main internet connection.

I purchased a wi-fi router a few months ago which was able to tie all of the computers in the house together so we could theoretically manage LAN games, streaming audio from one computer to another and sharing a gigantic hard drive. The only thing I had to consciously do was ignore every instance of “how to hook your router to the internet” because routers don’t really take into account dialup connections. Here is how it looked: 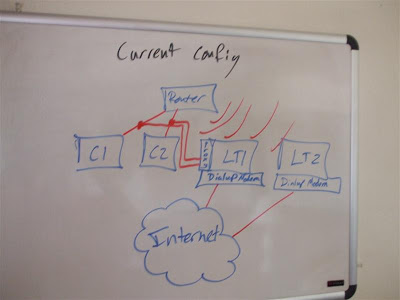 If you notice, I had a nice little tie point for the four computers (actually, I couldn’t make Laptop 2 connect due to Windows Vista finickiness, but it would have worked if I’d been able to sit down and fix it up). But this tie point was not at all able to access the internet. Instead, I had to run a proxy on Laptop 1, which has a built-in dialup modem. That way, Computer 1 and Computer 2 could route THROUGH that proxy via the internal network I had set up and access the internet just fine. Very nice..and workable.

Of course, everybody who has anything to say about anything will say that running dialup through a proxy or internet connection sharing is pretty pointless, and I have to agree. 28Kbps (3.5KB per second) running on even just one computer is painful to deal with. Splitting it between two or more would be one of the most annoying problems you’d run in to. BUT my point was, I wanted to make it work! Putting annoyances aside, will it even WORK? Of course. The picture above shows the configuration that actually worked for me.

In fact, Laptop 1 and Laptop 2 both had dialup modems to connect to the internet, as you can see, but if I had successfully been able to get Laptop 2 onto the wi-fi network, I could have routed that through the proxy so that Laptop 1 would have been the only machine with a real internet connection. 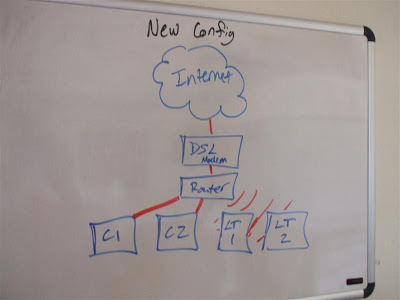 However, just 30 minutes ago, Mom and I got on the phone with our phone company and had them add DSL internet to our landline phone service!! FINALLY I can standardize my router and use the modem port on the back of it…and forget all this proxy and internet connection sharing nonsense that I had to work with.

At least, they said that by Wednesday the line should be activated with DSL. And by Wednesday, they’ll have the self-installation disc with all the tutorials on how to make sure it works. I’m excited. We’re planning on stopping by Best Buy this afternoon to pick up the $40 modem. Of course, that’s a whole new snag. People assume that you don’t already have a standalone router that cannot connect directly to the internet. They think that you don’t have ANYTHING and that you’ll just buy a router-modem combo, which is very true in the STANDARD case.

Of course, the combination router-modem box will cost $100 or more. And the standalone router I have now was $100 by itself. Via marketing logic, you would think that my $100 router by itself is of a higher quality than a router + modem that costs $100. That’s my guess.

Anyway, I went to Best Buy earlier this week to check out what was possible and it turns out that for a mere $40, they also have a standalone DSL modem. Of course, there’s only one choice in that sense, meaning a DSL modem is a DSL modem. There probably isn’t a lot you can do with it apart from hooking it up. And by hooking it up, I mean, attaching it to the phone line, running an ethernet (CAT5) cable from the modem to…the router or a single computer, which I can do both, installing whatever software on that computer (or a computer that can access router functions), and accessing the modem from inside the home network.

This I am very excited about…but still somewhat confused. The phone company, in order to set us up, had to know how many computers would be connecting to the internet at any given time. But..why do you need to know? I can put a TON of computers in my home network. My router is a very nice one and can take probably hundreds of simultaneous connections. Why does the ONE wire that comes from the modem and that plugs into the WAN plug on the router need to know how many computers are behind it?

Unless somehow the router and the modem together are going to give each individual computer its own internet IP address. I don’t know! I guess we’ll find out. I had almost hoped and was at least planning that the router itself would be given an IP address on the internet and that the computers behind it would be able to “route” through to access the internet, but any What’s-My-IP web scripts would only see the router’s IP as accessing their sites/services, not the Laptop 1, Laptop 2, Computer 1, Computer 2 that’s accessing the router.

Maybe there’s something I don’t understand, but that’s how I thought this was going to work. But really, I should know by Wednesday how everything works. I told them that I was up for installing it myself instead of having a tech come out and fix us up for $50. Save money…and learn the ins and outs yourself. Not that I’d want to hack my connection. I just don’t want to be one who stands around hoping the tech knows what he’s doing because I don’t. I want to know what he’s doing also!

All in all, I’m excited. And you should be too. After all, if this is a success, I’ll be able to finally host a website from my very own computer!! No more of this Brinkster stuff for me.