Last April, after months of researching and stressing over whether or not I should (or could), I finally bit the bullet and spent $1300 on a nice 24Mpx Pentax K-3 DSLR. This is a super camera that I really have been enjoying and getting some high quality photos with. Most of all I like the standard ability you get with any DSLR of a fully manual photograph, something you just don’t get with a snapshot like my old Fujifilm A820. Sure the good snapshot cameras come with that little pseudo-manual exposure mode where you set one or two preferred manual settings and the rest remain automatic, but a nice DSLR will give you the ability to adjust everything about both exposure AND focus.

The one biggest drawback I’ve discovered with expensive DSLR cameras are the equally-as-expensive accessories. Sure, I can justify paying $400+ for a nicer lens, because I understand the need for accurately-ground and polished glass, spherical aberration, and the like to produce a decent to high-quality photo.

However, the minor accessories themselves are atrociously overpriced, especially for the Pentax brand.

To date, 8 months later, in addition to the two Wasabi-brand batteries+charger I felt were a good idea to have ($25), I am now a semi-proud owner of a second brand-name focusing screen ($45) (I didn’t realize the camera already came with the exact one I ordered separately), a brand-name battery-grip ($125), a brand-name electronic cable release ($40), a brand-name flash-mountable GPS unit ($200), a brand-name K-mount to 42mm threaded adapter ($50), a 62mm Hoya circular polarizer ($70), a 62mm Hoya skylight filter ($35), and a 62mm Tiffen 0.3 neutral density filter ($26). Doing some quick calculator math because I’m too lazy to spend two minutes doing it in my head this brings my total cost for accessories that I’ve purchased in the last eight months to $616, which is an additional 60% of the cost of the camera itself (which came with a stock lens)!

Now the one thing that I don’t have for this thing, which I probably ought to have if I want to do any of the long-term stuff I’ve already pushed my batteries to the limit with is the AC adapter. Except for one thing. The OEM AC adapter for the K-3 camera is a mindblowing $100.

Not only does the AC adapter use a somewhat-obscure Japanese connector – a Hirose H10485, but the voltage requirements (8.3V) for this camera are EXACTLY the same as that for the Pentax K10D for which a DIYer created a decent tutorial for a number of years ago, as well that of the K-5 which an eBay seller offered power supplies for a mere $16.

I’ve examined the K-3’s AC connector and it looks exactly the same as previous models. Why then, for this model, did Pentax decide to create a completely new part number for yet another ‘official’ AC adapter and charge $100 for it when I can get what LOOKS like an equivalent for $16? Actually the only two questions regarding this that I have are:

The only reason I could see to paying the full $100 for a simple 8.3V DC power supply is that people don’t want to risk plugging something whose material cost is less than $16 sold by a third party into their $1000+ camera when the $100 OEM version is guaranteed to work. Oh, and it keeps any warranty valid.

By the way, the cable release, which connects to the camera via a simple 2.5mm stereo headphone jack is the one of the simplest of DPST circuits: 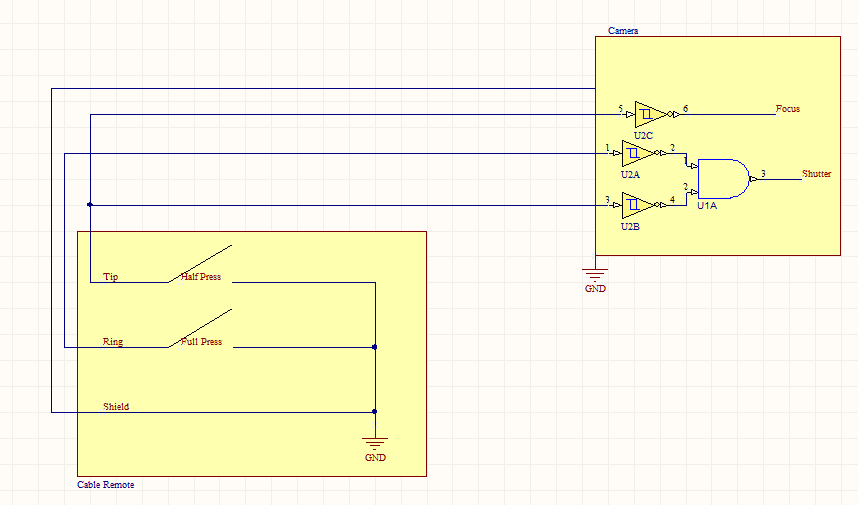